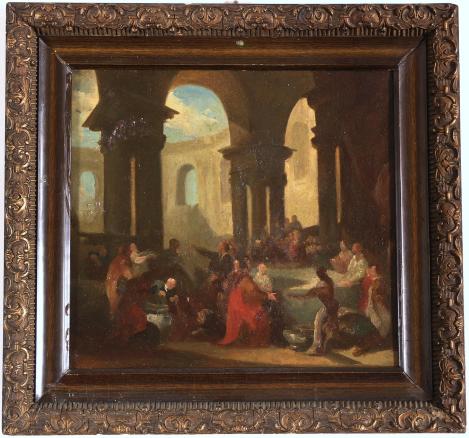 Oil on paper, laid down on stretched canvas

Routed to a military career, as was the custom of the noble families of Piedmont, after having obtained the rank of second lieutenant of grenadiers at the Military Academy of Turin, he decided to devote himself to art studies. Academy of Fine Arts in Turin was a pupil of A. Boucheron, F. Bonsignore, P. Bagetti and P. Righini. He perfected during several trips in Italy and abroad: Germany, Switzerland and France. From 1853 to 1860 he was deputy secretary of the Company Promoter of Fine Arts in Turin, which participated closely with drawings, landscape paintings, portraits and history paintings.

I was drawn to this painting after falling in love with Hubert Robert’s “Ancient Ruins Serving as a Public Bath”: http://en.wahooart.com/Art.nsf/O/8LJ3VD/$File/Hubert-Robert-Ancient-Ruins-Serving-as-a-Public-Bath.JPG

There was an error retrieving images from Instagram. An attempt will be remade in a few minutes.